The Science of Laser

THE SCIENCE OF LASER LEAD EXTRACTION OR REMOVAL

Photoablation is the use of ultraviolet laser light to break down and remove matter.

The Spectranetics CVX-300® Excimer Laser System generates 308 nanometers (nm) laser energy by electrically charging two gases, Xenon and Chloride (XeCl). The laser energy is transmitted along flexible fiber-optic strands encased in catheters and sheaths, which are passed through arteries and veins. The ultraviolet light energy is focused on the cardiovascular lesion or tissue requiring treatment. This process is called photoablation.

THE SPECTRUM OF LIGHT 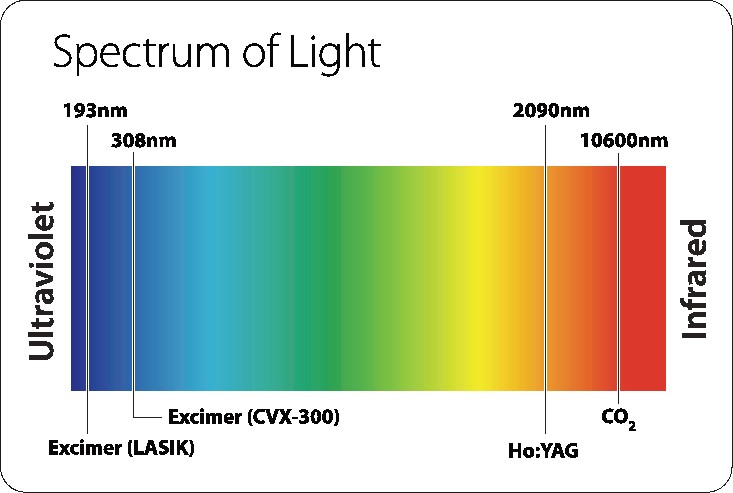 Laser light emitted from the Spectranetics laser is in the blue, or ultraviolet, spectrum at 308nm – similar to laser light employed for LASIK at ~193nm. As light moves toward the red spectrum it increases in temperature.

Mechanisms of Action: How Does Photoablation Work?

Excimer laser light is delivered to the tissue through a fiber-optic catheter. In a liquid environment, three mechanisms contribute to the ablation process: photochemical, photothermal and photomechanical. Transfer of the photothermal energy leads to vaporization.

Timeline of a Single Pulse